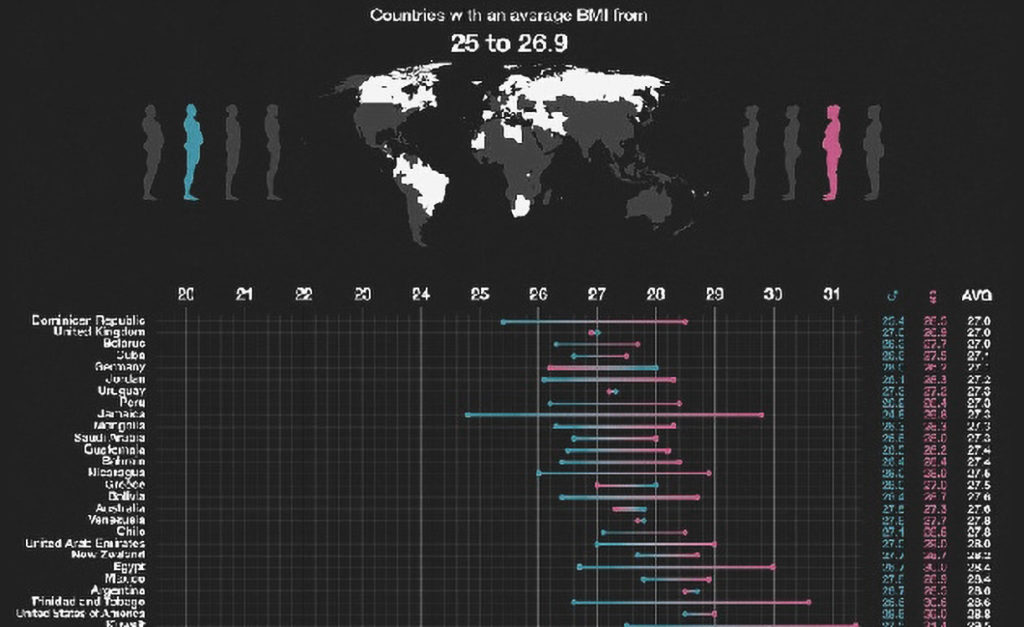 Measuring by their Body Mass Index (BMI), the fattest and the healthiest countries have been named by a new survey published on the Mail Online.

Australia gave an average BMI of 27.5, making it the 11th fattest country in the world, beating United Kingdom, Germany and Greece.

A healthy BMI for an adult is between 18.5 and 24.9 and it’s calculated by dividing your weight by your height squared (BMI = weight / (height) x (height)).

The study reflected on each country’s lifestyle choices and thereof drew the comparison in their BMIs. Even though this isn’t the most ideal way to determine a country’s obesity rate, but it sheds some light on what the healthier countries might be doing that we aren’t.

Take Netherlands, their lifestyle during the warmer months is based on incidental exercise. A study proved that 40 per cent of the country rides bike to work, shops and homes, which means there are less people sitting in cars and on public transport.

Pasta-loving Italians also showed a BMI average of 25.1, much lower than a majority of countries, only to prove that healthy eating can be done outside of the rulebook. A typical Italian diet is rich in olive oil, legumes, unprocessed carbohydrates and a rainbow of vegetables, which when translated is also knowns as the Mediterranean diet.

Japan ticked off the list with 22.5 as the average BMI, and if you’ve ever been to the country, obesity is virtually non-existant in there. Their focus on fresh, raw food rich in protein and low in carbohydrates and sugar is definitely worth a mention. But it’s really to do with the Japanese lifestyle of adapting to variety when it comes to meals. They don’t eat the same brown rice stir fry everyday, instead cook a different kind of fish and steam in-season vegetables on a nightly basis.

There’s so much to learn from these countries and their lifestyle choices.

In Australia, we have the space and the weather to take advantage of our outdoors. This enviable lifestyle of being able to run along the ocean and then take a dip in it, almost throughout the year, is something very few countries get to experience.

Something to take home from this… don’t you think?