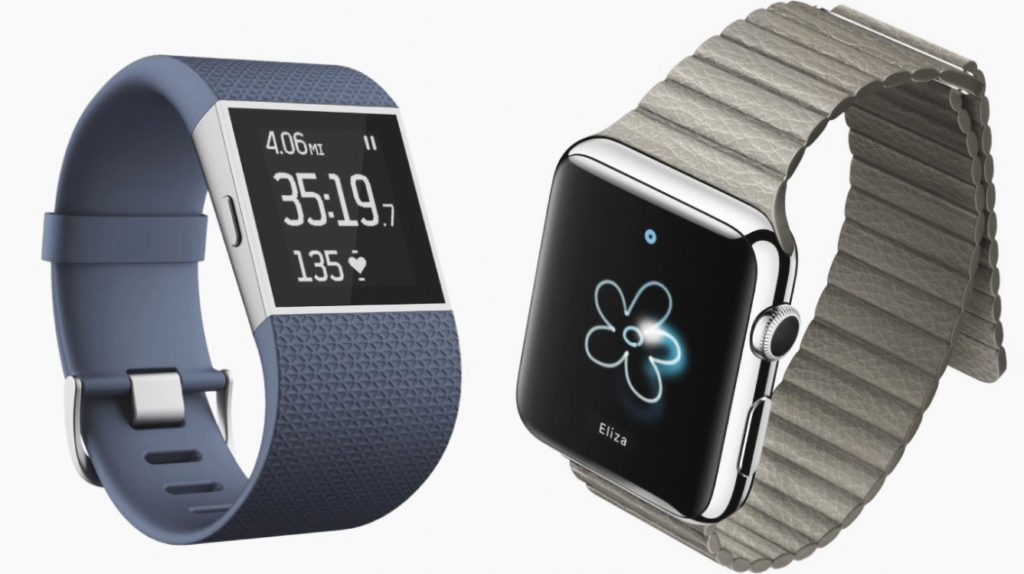 Can you tell I’m excited!?! The highly anticipated arrival of the Apple Watch, the latest player on the wearable technology scene, brought with it speculation about just how smart watches will impact our health and fitness.

Rewind to 2014 and Fitbit was the original fitness tracker, making up 70 percent of sales in the fitness tracker market. But with the Apple Watch arriving on the scene on the 24th April 2015, the world is watching to see if the latest player on the wearable tech scene lives up to expectations.

So, what’s the difference? Fitbit is targeted at athletes and regular people who want to boost their fitness with the assistance of a dedicated fitness tracker. The Apple Watch offers the same service and more, completing syncing with the iPhone so you get a

ccess to its tech features from your wrist. It reminds you to stand every hour, and has the potential to share your personalised information with health and fitness professionals. Now, that’s high tech!

But before you call Apple Watch the clear winner, here’s the catch: the Fitbit’s simplicity – some may say limited capability – has its perks. For starters, the Fitbit is more compact in size – it’s light, fits cleanly on the wrist and as a result it will continue to attract athletes who want a dedicated fitness band. The Apple Watch, even in the Sport version is more chunky on the wrist, and may not be as well suited to training and events. But then again it’s a lot smaller than some of the other brands such as Garmin.

Cost is one of the key considerations for any lifestyle purchase and wearables are no exception. The Fitbit’s pricing starts around $169 for the Charge, and Apple Watches start at $499 for the cheapest sports model. Not that high prices have stopped Apple enthusiasts before. With more than three million Apple Watches already sold, according to finder.com.au, one of Australia’s largest comparison websites, there’s well and truly a place for the Apple Watch in the wearable tech market. In fact, the arrival of the Apple Watch is set to grow the smart watch market by at least 50 per cent this year alone, and it’s estimated that 4.2 percent of Australian adults – that’s 800,000 people – intend to buy the Apple Watch. The question is, will you be one of them?