What Do Your Food Cravings Mean? 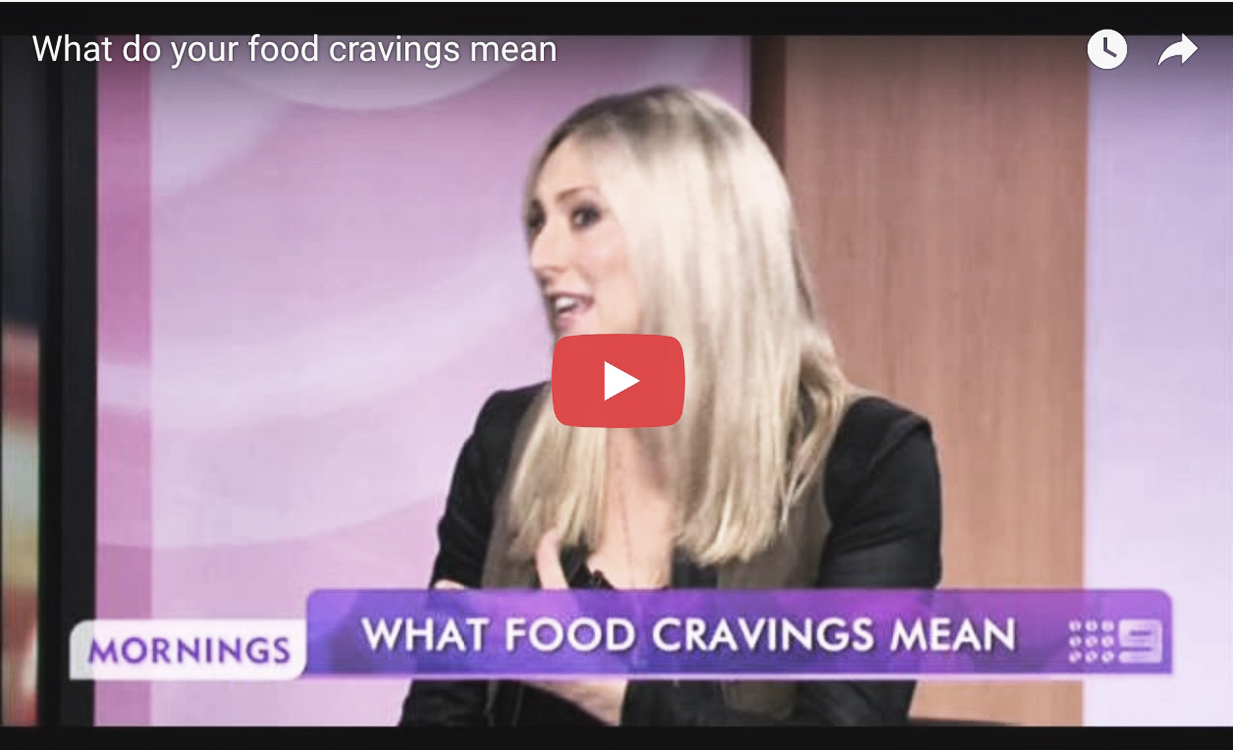 Cravings are normal. We all get them at some point of the day or the month. There’s nothing to shy away from because ultimately that is the only way our body talk to us.

In the above video on Mornings9, I explain five most common food cravings and what they really mean.

When you crave chocolate, your body actually needs magnesium, not the sugar. Bet you’re thinking that makes no sense, but did you know that dark chocolate is very rich in magnesium, so strong cravings could indicate a deficiency in a mineral vital for your skin and hair. What’s more, levels of the mineral drop during the second half of your menstrual cycle, suggesting a possible link with many of the symptoms of PMS.

“Drinking too much alcohol, tea, coffee and fizzy drinks can also deplete levels of magnesium,” says Nicola Lowe, professor of nutritional sciences at the University of Central Lancashire.

SOLUTION: Attack 75% and up cocoa chocolate, as it will have more magnesium and less sugar, henceforth curbing your craving. Up for a challenge, next time you crave chocolate, have raw Brazil nuts instead and test the waters of how you feel. Leafy green vegetables are also good alternative to refuel the magnesium in your body, as are brown rice, wholemeal bread, and pumpkin seeds.

A constant craving for bread, pasta, rice and potato can be a sign that you’re low in the amino acid tryptophan.

“The body needs this to synthesise the mood-regulating brain chemical serotonin,” explains Dr Lowe. “A lack of it can lead to low mood, anxiety and problems sleeping. Though carbohydrates don’t contain tryptophan, research suggests increased blood sugar means more tryptophan is shuttled to the brain.”

SOLUTION: Up your protein intake instead, and see if your mood improves along. Good sources of tryptophan include turkey, milk, eggs, cashews, walnuts, cottage cheese and bananas.

When you crave red meat, it can be sign that your body needs iron, but it may also mean you’re low on zinc; so cater to both.

“Mild zinc deficiency is increasingly common … as people tend to eat less red meat now,” explains Professor Lowe. “The mineral plays an important role in immune function, among other things, so, if you’re running low, you’ll be more susceptible to colds and flu.”

SOLUTION: Kangaroo meat has got one of the highest levels of iron that absorbs in our body. Alternatively, you could also try shellfish, mussels, lentils, spinach, pumpkin seeds, cheese and wholemeal bread to refuel on the iron and zinc deficiency.

This is a bizarre one, if you crave ice, it might have something to do with your body being anaemic and deficient in iron.

Nearly half of us aren’t eating enough iron, according to The National Diet and Nutrition Survey, and heavy periods also put women at increased risk.

SOLUTION: Grab some ice, if you may, otherwise some easily absorbed sources of iron can be found in wholemeal bread, figs, apricots, spinach, broccoli, sardines and lentils

Have a super sweet tooth around 3pm every day? You could be deficient in chromium.

SOLUTION: If you’re trying to stay away from the sugar, reach out for some chromium-rich food instead, such as kidney, beef, chicken, carrots, potatoes, broccoli, asparagus, wholegrains, and eggs, and you won’t have those afternoon slumps all together.

What’s your worst craving? How do you curb it?